Honey Biba Beckerlee is a visual artist working with installation, video and photography. She holds an MFA from The Royal Academy of Fine Art, Copenhagen, Denmark and an MA in Contemporary Art Theory, from Goldsmiths College, University of London. Prices and awards include “Excecutive J. P. Lund & Wife Vilhelmine, born Bugge's fund” 2010, “Brewer J.C. Jacobsen’s Portrait Award 2009” and Bikubenfonden’s talent grant 2004-2006. She has participated in residencies in Skriduklaustur Iceland (2009), Sparwasser in Berlin (2011) and the Danish Arts Council Istanbul (2012).  She currently lives and works in Copenhagen Denmark. URL: www.kunstdk.dk/kunstner/honey_beckerlee

In 2012 Honey Biba turned 34 and by becoming “older than Jesus”, she was beginning to doubt her chances to achieve the international career she had been striving for. She began to wonder if she even still wanted to make the sacrifices needed in order to get there; giving up economic and domestic security, not having her friends and family around her. The hours she spent trying to work became more and more unproductive and she sank into depression.   Emerging from this state yet still unable to produce art, Honey Biba felt a profound need to make something beautiful, and thus meaningful out of this difficult period in her life.   During her darkest moments, she had an acute sensitivity towards everyone and everything around her; an awareness of their fragility which touched her deeply.

While at RFAOH, she will investigate the relationship between disease and beauty and look into this acute sensitivity that marks a personal crisis by looking at it as a potential state to create from, even if such creation is not to be considered art.

I found Shinobu and Matthew dedicated and very supportive of me during the residency. I find the project very sympathetic and important for conveying a broader sense of a career in art. I was very happy to participate because I was at such a difficult place in my career, where I needed to feel that I was still dedicated to art, but not strong enough to push my career toward exhibition-making etc. In this way, it really was a needed artistic hiatus for me.

My biggest difficulty with taking part in the residency, was the demand that the work has to categorized as non-art and that whatever I produced for the residency was not to be used in any coming artistic endeavors. It made it difficult for me to contribute with anything that excites me, since I might use these ideas or research for future projects. This way, I had a hard time coming up with anything for the residency all in all.

R. Buckminster Fuller (1895–1983) “studied mathematics at Harvard but was expelled for “lack of ambition”; he never obtained a college degree, and worked for many years at meat-packing plants until he was able to support himself and his family through teaching, writing, and his inventions. He suffered an extended bout of depression after the death of his daughter in 1922, while his family was near bankruptcy and living in public housing. In his memoirs he wrote that he overcame thoughts of suicide by deciding to make the rest of his life “an experiment to find what a single individual can contribute to changing the world and benefiting all humanity.” 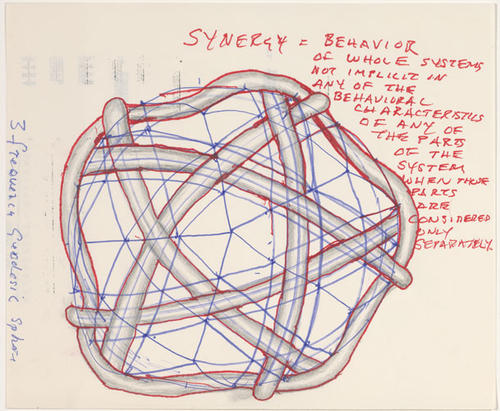